What is RTK and Why do I Need it?

Centimeter-grade Real Time Kinematic (RTK) GPS and GNSS receivers have been available for a long time, but only in Bluetooth format for mobile GIS for a few years.  As such, the use of that high precision equipment in the field is a newer phenomenon for field workers outside licensed land surveyors or the construction industry.  RTK GPS receivers are traditionally very expensive and their accuracy has been thought of as beyond the field mapping needs of most environmental and engineering firms, and government land management groups.  However, with the introduction of Bluetooth RTK receivers for use with field tablets and mobile GIS, RTK’s potential has become less expensive to achieve and much desired.  Add to that the availability of Bluetooth RTK receiver rentals from Anatum Field Solutions, and the continued progression of many companies into mobile GIS workflows with tablets becomes much easier and more affordable.  Using a Bluetooth RTK receiver for the ultimate level of accuracy is now an obvious choice for field mapping tasks.

Currently, most mobile GIS field users are utilizing sub-meter receivers.  These receivers achieve that level of accuracy with assistance from SBAS (WAAS or Wide Area Augmentation System) satellite corrections.  This system was developed by the FAA for the GPS constellation to increase accuracy and availability.  WAAS uses a network of ground-based reference stations in North America to measure small variations in the GPS satellite’s signals.  These are then routed to master stations to send corrections to the WAAS satellites in geosynchronous orbit above North America to then be broadcast down to GPS receivers capable of receiving and applying these corrections to compute the GPS receivers location with improved accuracy.  This gets the sub-meter receivers accuracy down to under 1 meter.  You can review our field test article comparing the capabilities of these receivers HERE.

The way this technology works with SBAS corrections from the WAAS network over North America looks like the diagram below.  A tablet is Bluetooth paired to a GNSS receiver.  The Bluetooth sub-meter receiver is acquiring location data transmissions from satellites in the GPS and Glonass constellations, which is providing approximately 2 to 4-meter accuracy.  Then, the SBAS satellites in the GPS constellation are broadcasting corrections to the GNSS receiver to increase accuracy down to the sub-meter levels we see in our field test data (HERE). 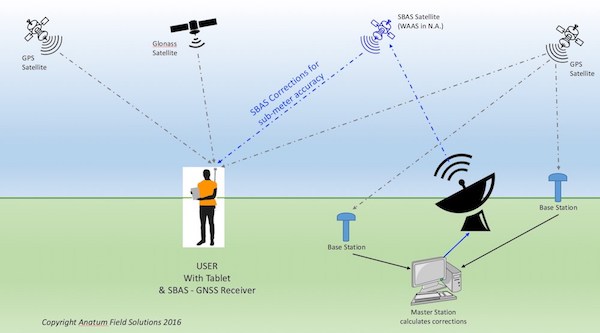 From the SBAS corrections for sub-meter level accuracy, the next step up in accuracy is using an RTK GNSS receiver like the Eos Arrow 200 or Geneq SXBlue III with the tablet.  RTK uses different corrections and transmission methods to determine locations compared to standard GNSS equipment.  The simple explanation is that RTK corrections for increased accuracy are received from either a network of RTK base stations or from your own dedicated base station.  For those interested in the more detailed explanation, check out this WEBSITE.

The simplest and cheapest method is to use an RTK GPS receiver is to receive real-time corrections from an RTK Network of base stations.  These networks for RTK are typically run by state Departments of Transportation, but there are also many private pay-for-service networks around the U.S.  Access to the Network is free in many areas and Anatum can help you determine availability in your area.  The method employed by this technology using an RTK Network looks like the image below.

Sure, most people from those career fields would look at a centimeter RTK receiver and say it is overkill because their accuracy requirement is only sub-meter.  A sub-meter GNSS receiver is certainly a valid option, and you can see that receivers like the Arrow 100 and iSXBlue II performed quite well in our field test comparison (LINK).  But what if you could buy or rent a centimeter RTK Arrow 200 receiver for the same price you currently pay for that standard handheld GNSS unit that doesn’t Bluetooth to your field tablet and only gets <1m accuracy real-time with SBAS (WAAS) corrections?  And with that handheld, if you want <50cm accuracy you will have to collect extra data in the field and complete time-consuming post-processing analyses to get your field data that accurate.

Transitioning away from that handheld GNSS unit to a Bluetooth RTK receiver and tablet will:

For consulting firms with clients that require post-processing, utilizing a Bluetooth RTK receiver can eliminate that requirement through an information sharing discussion with your client.  Essentially, the same types of calculations done with the post-processing method to increase the accuracy of field location data is being done in real-time by RTK base station networks if your RTK receiver is connected through cellular service to your local RTK network.  The RTK network is pulling the same satellite data used in post-processing and conducting corrections analyses, and then broadcasting those corrections from an NTRIP Castor live right to your Bluetooth RTK receiver connected to your field tablet!  The project savings over legacy post-processing methods are truly significant.

What about working in remote regions or areas without a local RTK network?

There are currently three Mobile GIS options in this kind of scenario; 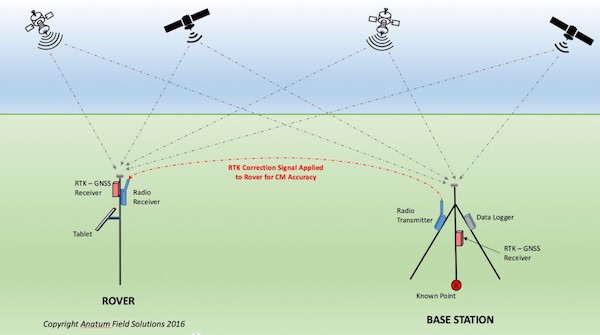 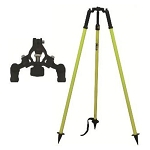