Comparing the new advanced to the existing dual and zoom

With the recent release of the Mavic 2 Enterprise Advanced (M2E Advanced), one of the most common questions asked is what are the differences between the new Mavic2E Advanced and the M2E Dual and M2E Zoom models? 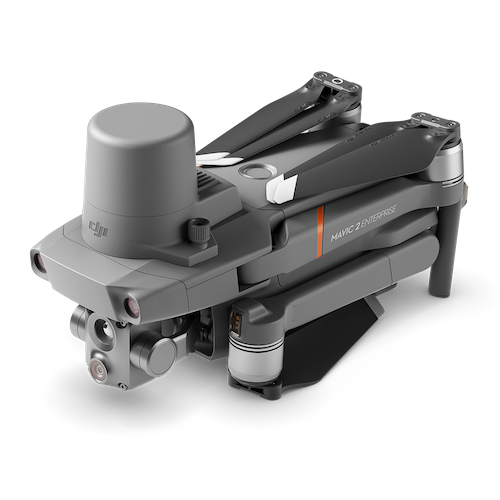 Since their release in 2018, the Mavic 2 Enterprise Dual (M2E Dual) and Enterprise Zoom (M2E Zoom) have been well regarded as affordable, easily deployable options for workers in the industrial inspection, emergency response, law enforcement, and search and rescue fields.

With the dual visual and thermal camera sensor of the M2E Dual, and wide-angle and zoom RGB camera sensor of the M2E Zoom, they fit a sweet spot of being compact, easy to use, and highly versatile.  However, DJI just released (April 2021) the Mavic 2 Enterprise Advanced (M2E Advanced), which looks very similar to the M2E Dual and M2E Zoom.  So, what are the differences?

At a glance the M2E Advanced, M2E Dual, and M2E Zoom look quite similar. All can be equipped, and come with, the same three payload accessories (i.e., the 2,400lumen spotlight, 100 dB loudspeaker, and low-light beacon), and all share a lot of the same features, including:

However, the differences between the first gen M2E aircrafts and the M2E Advanced largely aren’t with the aircraft themselves but with the sensor tech.  We like to say that the M2E Advanced is like a hybrid of the M2E Dual and M2E Zoom, but on steroids!

Both the M2E Dual and M2E Advanced feature dual visual (RBG) and infrared thermal camera sensors.  However, the M2E Dual is equipped with a fairly low-resolution 160x120 pixel (px) (9 Hz) FLIR Lepton 3.5 thermal imaging unit sensor.  The sensor could provide real-time temperature readings via spot check but could not produce radiometric JPEG images (R-JPEGs), which have temperate data embedded in each pixel and can be analyzed using the DJI Thermal Analysis Tool or FLIR tools post-flight. This rubbed some people the wrong way, especially those in the roof inspection business, as they often wanted temperature data associated with their imagery to show to their clients.

While the thermal sensor on the M2E Dual of fairly low-resolution, it features FLIR’s proprietary MSX technology, which uses an edge sensing algorithm to enhance the imagery.  It acts almost like an overlay of the thermal/visual imagery and brings added detail to an otherwise muddled image. 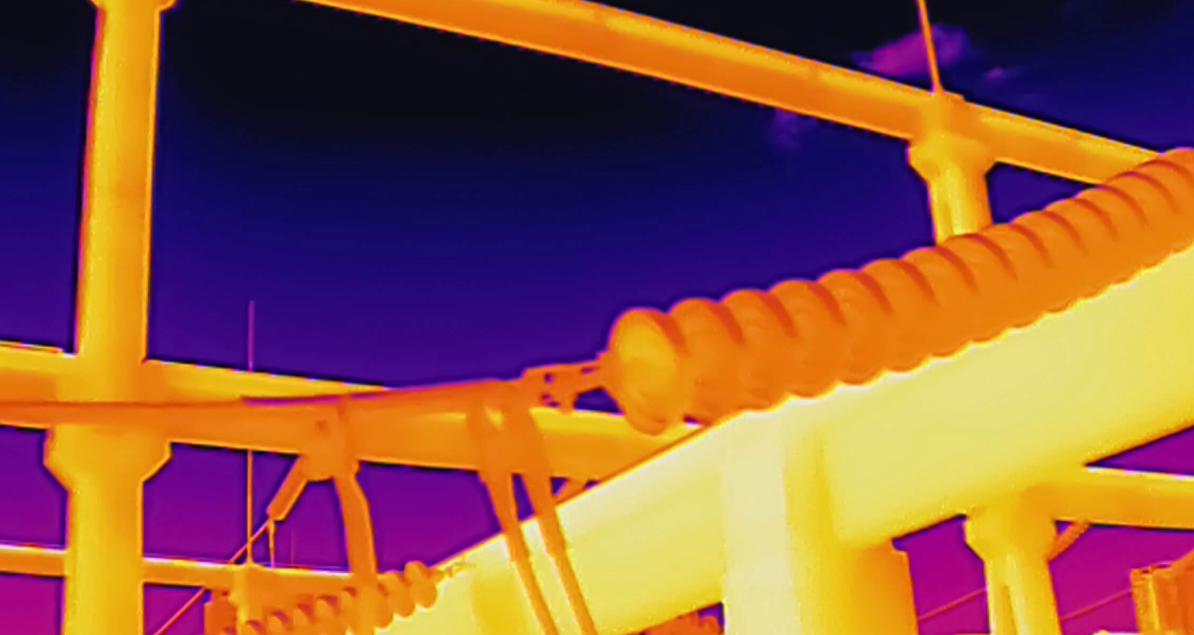 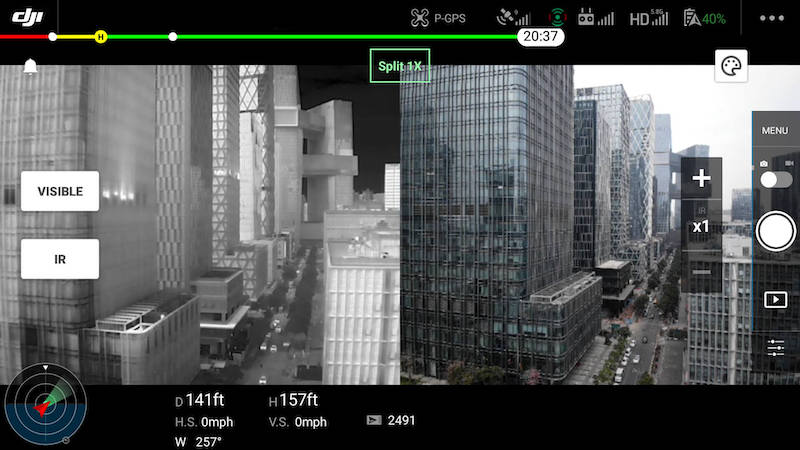 In terms of software interface, both the M2E Dual and M2E Advanced feature a similar set of parameters that can be tweaked and tailored.  These includes adjustable color palettes and isotherms, spot meter measurements and area measurement functionality, flat field calibration, and temperature alerts.

Switching between the thermal and visual cameras with a tap is available for both models, but a side-by-side visual/thermal video feed is only available on the M2E Advanced.

So, the thermal sensor on the M2E Advanced is a significant improvement over its predecessor but what about the visual camera, did that get the upgrade treatment too?  The short answer: it sure did.

In comparison, the M2E Advanced is equipped with a 48MP, ½” CMOS sensor.  This sensor is capable of 4K video (30fps) and 8,000 x 6,000 stills.  The slightly larger sensor size also has better dynamic range, allowing the better extraction of details from brightly lit and shadowed areas.

However, the most notable difference is the reach of the visual camera.  The M2E Advanced has an impressive 32x digital zoom (4x lossless zoom on FHD video).

The combination of the larger sensor size, higher megapixel count, and longer zoom makes the M2E Advanced an ideal inspection tool, as it allows you to keep the drone in a safe position while zooming in closely on critical components.

It’s this type of workflow that also highlights a significant difference between the M2E Dual/Zoom and the M2E Advanced, and that is the optional real-time kinematic (RTK) module that is available for the M2E Advanced but not the M2E Dual or M2E Zoom.

If you’re not familiar, RTK is a ground-based system that is used to enhance the accuracy of GPS receivers.  Whether we’re looking at a terrestrial GPS receiver or the GPS module found in a UAS, modern GPS (multi-constellation) receivers are capable of providing impressive accuracy.  However, that accuracy has its limits and often those limits are around a few meters 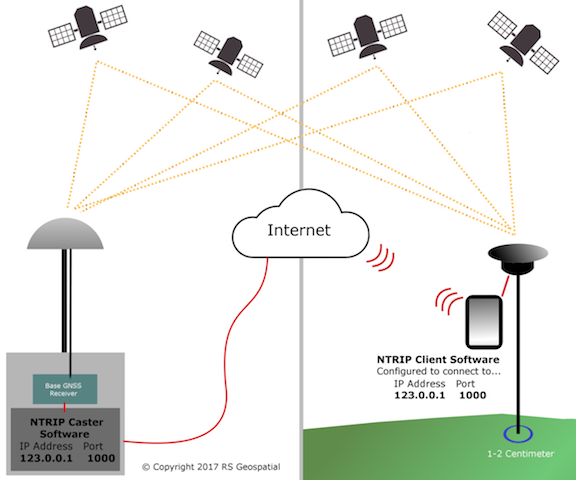 of accuracy.  A few meters of accuracy are often good enough for most scenarios, but high accuracy mapping solutions require systems something ‘tighter’ than that.  To improve upon that accuracy, we can use differential corrections (algorithms), to help account for disruption/timing delays associated with the distortion and delays as navigational satellite radio waves pass through the high atmosphere.  These corrections can be obtained in real-time by wide-area augmentation system (WAAS) satellites, which are utilizing reference stations on the ground to improve upon that accuracy, and to beam that corrective algorithm to commercial GPS receivers on the ground.  These WAAS corrections can help a modern GPS receiver achieve sub-meter real-time accuracy.

However, to improve upon that even further, RTK corrections can be used.  RTK works in a similar manner to those WAAS corrections but RTK; Networked Transport of RTCM via Internet Protocol (NTRIP) systems, work with more localized ground-based reference station(s) that are relaying these differential corrections via internet/cellular connections.  With an RTK enabled device we can obtain centimeter-level accuracy in real-time.

So, in addition to the M2E Advanced being a powerful industrial inspection, emergency response/search and rescue UAS, is it also a high accuracy mapping tool?   Not necessarily.  While a UAS with RTK can obtain centimeter-level accuracy and is an ideal tool for high accuracy aerial mapping, even with the optional RTK module the M2E Advanced is not designed for mapping.

For one, the camera on the M2E Advanced lacks a mechanical shutter, which is desirable in a mapping UAS as a mechanical shutter reduces the rolling shutter effect which can occur when a camera with an electronic shutter captures a moving image (or is motion when it photographs a stationary image).  Additionally, the M2E Advanced lacks DJI Time Sync technology so it is not recommended for aerial mapping.  If M2E Advanced is not designed for aerial mapping, why can it be equipped with an optional RTK module?

As a system with impressive industrial inspection capabilities, the RTK module for the M2E Advanced is there to make the drone more stable in flight, especially when flying around electrical transmission lines and substations, or areas where overhead obstructions can disrupt GNSS signals. Transmission lines and substations areas produce strong electromagnetic fields, which can disrupt GPS signals and impact drone’s stability and predictability in-flight.  As a result, the RTK module helps the drone fly with more stability and accurately in potentially challenging areas.

While the M2E Advanced has RTK capabilities, it is not compatible with DJI’s mobile RTK base station (D-RTK 2).  Instead, M2E Advanced users hoping to use the RTK module should confirm that they have an RTK network or private base station they can utilize.  Free, public RTK networks are available in some states but not all.  Additionally, private subscription networks are a viable option in a lot of areas not served by a public network.  So before assuming you can use the RTK module, it is recommended that you confirm that a network or RTK source is available, as well as there being cellular service in your project area ,as NTRIP RTK corrections are broadcast via cellular networks.

The M2E Advanced shares a lot with its predecessors the M2E Dual and M2E Zoom, and that’s a good thing, these are highly capable, portable aerial systems that can accomplish a variety of tasks.  However, the M2E Advanced builds upon those systems with improved cameras and sensors. With higher resolution visual and thermal sensors, longer zoom capabilities, and with the optional RTK module, the M2E Advanced is able to ‘see’ and capture more and to do so from a safe distance.

In terms of flight performance and duration, the three M2E aircraft are pretty similar.  All will give you approximately 31 minutes of flight time and have a max speed of 45mph.  The new M2E Advanced has a slightly faster ascent and descent speed but overall if you’ve flown a M2E Zoom or Dual, or Mavic 2 Pro, the M2E Advanced will be a familiar experience.

The M2E Advanced has the same ‘ruggedness’ as its predecessors. While not designed for flying in the rain, or any precipitation for that matter, the M2E Advanced uses the same self-heated batteries as the M2E Zoom/Dual, and has a can be used in temperatures ranging from -14F to 104F.  Additionally, if you have a Mavic 2 Pro, you can use those batteries with the M2E Advanced; however, as those are not self-heated, you won’t benefit from that feature.

The M2E Advanced uses the same OccuSync 2.0 video transmission (10km) as the M2E Dual/Zoom, which provides a stable connection between the UAS and the remote controller via auto-switching 2.4 GHz and 5.8 GHz frequency bands with the ability to support different frequencies for uplink and downlink data streams.  It also features DJI Air Sense (ADS-B manned aircraft detection), and has the same omnidirectional (forward, backward, upward, downward, and side obstacle avoidance sensors).

The M2E Advanced is slight heavier (909g) than the M2E Dual (899g) and M2E Zoom (905g) but shares the same dimension (folded: 214x91x84mm)(unfolded: 322x242x84mm).  Like its predecessors, the M2E Advanced also uses AES-256 encryption to ensure data transmission security and has password protection, it is equipped with 24GB of onboard data storage, and features discreet mode which allows pilots to disable the UAS’ LED navigation lights.

The M2E Dual/Zoom and M2E Advanced use the DJI Pilot flight app, but in terms of autonomous flight, the M2E Advanced now supports 240 programmable waypoints.  The M2E Zoom/Dual maxed out at 99 waypoints.

The M2E Advanced will be very familiar to Mavic 2 Pro or Mavic 2 Enterprise pilots; however, the improved sensors are a big step up over its predecessors.  The high resolution RGB camera and telephoto zoom combined with the 512-640px radiometric thermal camera (also zoomable), and the ability to maintain RTK accuracy make the M2E Advanced almost a Matrice 300RTK and Zenmuse H20T Jr.  That obviously slightly overstating the M2E Advanced, but at essentially 1/4th the price, we’ll go with it.
The M2E Advanced standard kit includes the aircraft, smart controller, the three aforementioned payloads (i.e. 400lumen spotlight, 100 dB loudspeaker, and low-light beacon), three pairs of low-noise props, one self-heated intelligent flight battery, the battery charger and AC power cable, a spare set of controller stick, USB cables, and comes with a rugged (IP67 rated) protective case. 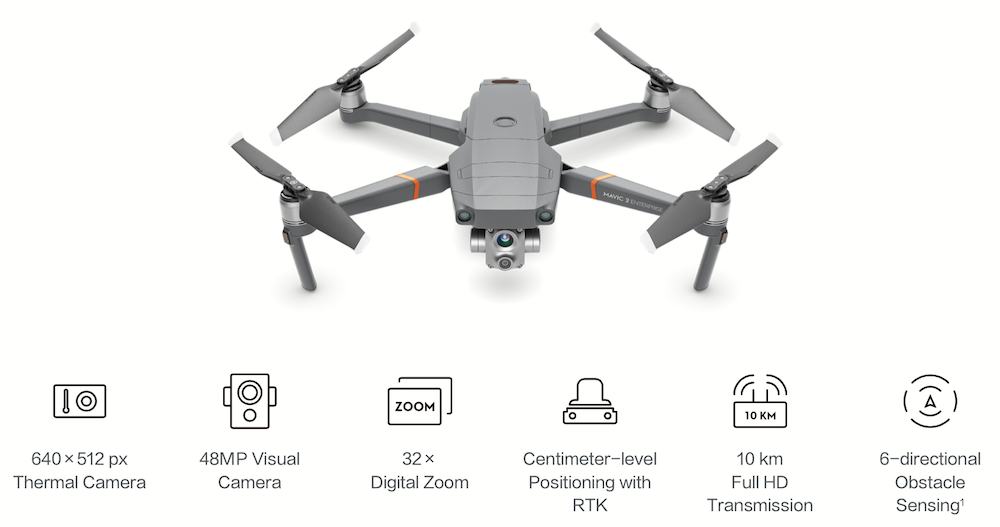